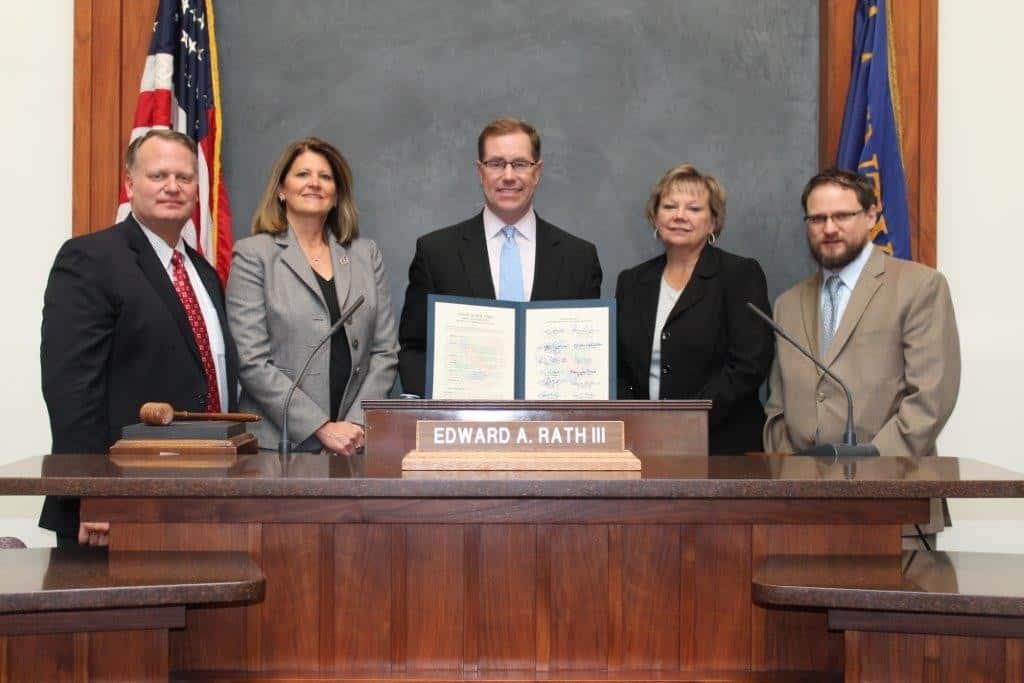 The event highlighted the efforts that Perry’s Ice Cream, who along with other local companies and Erie County, are implementing programs and initiatives that are protecting our environment. Perry’s has been incredibly successful in its sustainability efforts. From its care for our community through various partnerships such as The Buffalo Bills, The Buffalo Sabres, One Buffalo, The Buffalo Zoo, and SUNY Buffalo, the company’s support for local suppliers and farmers (100% of their milk comes from farms within 50 miles) and environmental practices to promote a healthier environment. Perry’s is also a founding member of the Western New York Sustainable Business Roundtable, whose members have pledged to create and implement a sustainability plan.

The event would not have been complete without an ice cream social, featuring Buffalo’s favorite ice cream, Perry’s, prior to the April 14 session.

“Perry’s Ice Cream is a great community partner in many aspects. In fact, today we featured the Super Hero flavor, which is benefiting Women and Children’s Hospital. Not only do they support so many worthy causes, they are also leading the way in improving their operations to be more green,” said Legislator Edward Rath. “We are fortunate that Perry’s has made Erie County its home and look forward to seeing what its future has in store.”

“For almost 100 years Perry’s has stood by the words of our founder (my great-grandfather) who said, ‘make sure you put in enough of the good stuff.’ The ‘good stuff’ standard touches every aspect of our company from our products to our team, community involvement and the environment. Sustainability is at the core of our continued success. Today, we are honored to be recognized for our efforts to sustain our business in Erie County through the fifth generation and beyond,” said Gayle Perry Denning, director of sustainability and fourth-generation Perry’s family member.

The Erie County Legislature recognized Perry’s Ice Cream for its efforts and hopes that all local businesses will continue to do their part to protect the environment. Erie County has recently launched a sustainability program that is changing how county government operates by reducing paper consumption, increasing its recycling efforts, and taking steps to reduce its own carbon footprint with reductions in energy usage. Within the Legislature, The Majority Caucus’ efforts to greatly reduce paper consumption are underway, in addition to other environmentally friendly changes.

Whether they are celebrating Earth Day or helping those in need, Perry’s is a partner to so many organizations. Throughout April, Perry’s is donating a portion of the proceeds from the sale of its Super Hero ice cream, which is made of cherry bubble gum, lemon and blue raspberry ice cream swirled together. The proceeds support Women and Children’s Hospital of Buffalo. Super Hero is available for purchase at Wegmans, Tops, Dash’s, 7-11, and Perry’s Ice Cream scoop shops throughout WNY. To find a location near you, use the Perry’s Flavor Finder via perrysicecream.com.