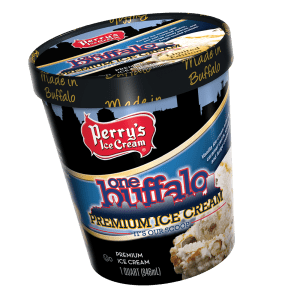 available in quart packages at retail stores. Fans first got a taste of the rich and creamy vanilla ice cream loaded with swirls of sea salt caramel, sponge candy pieces and fudge-coated pretzels in October when One Buffalo was released exclusively at First Niagara Center and (716) Food and Sport in Buffalo, and Blue Cross Arena in Rochester, N.Y.

One Buffalo Premium Ice Cream is the first food product to be part of PSE’s One Buffalo campaign, which represents teamwork, a unified passion and pride of being part of the Buffalo community. Last summer, the Perry’s team proudly collaborated with Kim Pegula to create the distinctive ice cream flavor that showcases local culture by incorporating sponge candy, the confection Buffalonians love.

“No one likes dessert more than I do and we are thrilled to be partnering with Perry’s to launch the One Buffalo Premium Ice Cream brand,” said Kim Pegula. “Perry’s dedication and devotion to Western New York truly embodies the spirit of One Buffalo.”

Robert Denning, President & CEO of Perry’s Ice Cream, stated, “We are proud to be associated with the ‘One Buffalo’ movement by providing a product that unifies and energizes the community.” He continued, “In terms of the packaging graphic design, we chose to illustrate the Buffalo skyline on the carton to express our excitement for the resurgence and major reinvestments in the city of Buffalo and Western New York community.”

Brian Perry, Executive Vice President & Chairman of Perry’s Ice Cream, explained, “One Buffalo represents our pride and enthusiasm in Buffalo and its culture. It signifies the feeling of being part of a bigger picture, whether that’s cheering with thousands of other fans at a Buffalo Sabres game, or swaying in a crowd at a Canalside concert. Our fans will feel that same sense of community when they enjoy a scoop of One Buffalo.”

Pride in Buffalo is nothing new for Perry’s. The Buffalo-based company, who has been crafting premium ice cream for 97 years, supports local suppliers and farmers whenever possible, as 100% of their milk comes from farms within 50 miles.

Perry’s quarts, including One Buffalo, are available at all retail locations where Perry’s Ice Cream is sold. You can find them in stores near you by using our Flavor Finder https://dev-perrys-ice-cream.pantheonsite.io/where-to-buy/.

Perry’s Ice Cream, founded in 1918 by H. Morton Perry and proudly headquartered in Buffalo, is a family-owned and operated fourth generation ice cream manufacturer with over 300 employees.  Perry’s Ice Cream uses fresh milk and cream from local farms to craft and slow-cook its delectable One Buffalo ice cream the old-fashioned way, one batch at a time, for an exceptionally creamy texture and taste.  For additional information about Perry’s Ice Cream, visit:  www.PerrysIceCream.com or @perrysicecream via: